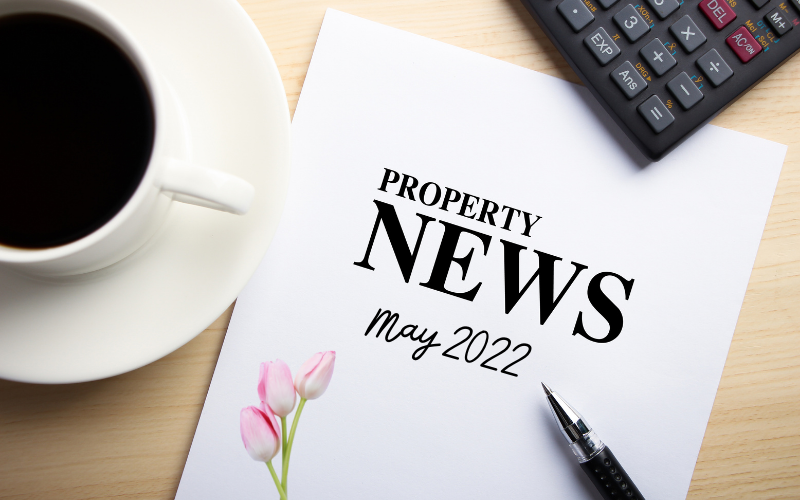 House price growth is finally starting to slow down, with some property experts predicting a crash this year. In other news, a shift in renters’ demands has been revealed by one leading property website, and fans of a popular TV series can get their hands on one of the houses used in filming.

Read on for all this and more in our May property market update.

Average UK property prices reached record highs in April, but the growth is set to slow down, according to one mortgage provider.

Major lender Halifax revealed that prices rose 1.1% in April compared with March, which was the 10th consecutive month of growing prices.

However, with the cost of living on the rise, along with an increase in interest rates, the lender is predicting a more significant slowdown in prices over the coming months, while some speculators are even predicting a property crash by the end of 2022.

Demand for properties continues to outstrip supply, which is keeping the market buoyant for now, but with household budgets being squeezed and variable mortgages affected by the Bank of England’s highest interest rates for 13 years, it’s likely that a slowdown is on the way.

Homeowners in parts of London are already noticing the difference, with average prices falling in 15 of the capital’s boroughs between February and March.

Renters Seeking More For Their Money

According to property portal, Rightmove, demand for rental properties with bills included has seen a significant jump in the past 12 months.

The website has reported a 36% increase in enquiries from tenants for homes where the rent includes utilities, as energy costs continue to soar.

It’s also been revealed that the average monthly rental cost across the UK (excluding London) has hit £1,000, which signals an 11% annual increase.

The startling figures reflect the competitive rental market at present, with Rightmove revealing that enquiries for rental properties are three times higher than the number of properties available.

The Rise of the £500k Property Market

For the first time in history, 15% of the UK is now made up of areas where average property prices exceed £500,000.

The most significant jump has occurred in the South West, where half-a-million-pound property sales have increased 167%, fuelled mainly by the race for space caused by the pandemic.

Unsurprisingly, 63% of London’s electoral wards fall into the £500k bracket, with a number of others falling just short.

Will the Housing Market Crash This Year?

Property professionals are split as to whether there’ll be an impending crash this year, with one expert advising would-be buyers to ‘under no circumstances’, take out a large mortgage.

Former government adviser, Paul Cheshire, is predicting a nationwide price drop of at least 10%, with rising inflation and falling incomes leading to a perfect storm for the housing market. And with interest rates forecast to continue increasing, it could lead to mortgages becoming unaffordable for many buyers.

The flip side of the argument is that buyer demand currently remains strong. Put simply, there are more buyers than properties available, which continues to be good news for sellers.

Couple this with an increase in homeowners switching to fixed-rate mortgages, plus the fact that mortgage rates are still low by historical standards, and there’s every reason to be optimistic.

One thing that most experts agree on is the likelihood of a fall in prices in the coming months, but the chances of a full-on meltdown may be slimmer than many of the doom-mongers believe.

Your Chance to Own a Piece of TV Real Estate

Fans of the hit BBC drama, Killing Eve, will be excited to know that one of the properties used in filming is currently up for sale.

The six-bedroom house has appeared frequently in the most recent fourth series of the drama, as the home of psychiatrist, Martin.

It’s not the first time it’s appeared on the small screen either – hit TV shows, Fortitude and We Hunt Together have both made use of the property’s open-plan spaces too.

The house is set on a private road in the leafy London suburb of Stanmore, with an asking price of £2.75m.

You can take a peek at the property here.

Committed BuyerHome buyers have been epically frustrated by Brexit, an election and now the pandemic and a second lockdown As such, the buyer market is more committed than ever. Buyers are prepared to pay the fees associated with buying your home because competition for property is currently so fierce. When we introduce you to Secure My Sale’s Committed Buyer pool, we hel...

Am I Allowed To Take My Property Off The Market Whenever I Want?

Have you put your home in Grantham on the market but are now wondering whether you should take it off again? Then don’t worry, you aren’t alone. Selling your home is a huge decision and many of our clients have the same kind of thought process, for many different reasons. In particular, the jitters can set in if your sale is taking longer than usual to progress. So,...

10 Frequently Asked Questions When Selling Your Home in Grantham!

If you are looking to sell your house in Grantham, you may very well be feeling a little overwhelmed, and who can blame you? It is a huge undertaking, not to mention an incredibly emotional time for you as a homeowner.  Many home movers find it extremely difficult to keep their personal feelings separate from their business brain when it comes to selling their home, but t...

Buying a home can be a frustrating process. It’s no surprise, then, that when the end is finally in sight, you can’t wait to seal the deal by transferring your deposit or final balance to your legal representative. But, before you do, it’s important to stop and think carefully. More buyers in Grantham than ever before are falling victim to online fraud. When...

Save your favourite properties to view later

Set alerts so you are the first to know

By continuing to use this website, we will assume you are happy to receive carefully selected cookies. Do you accept these cookies and the processing of personal data involved?